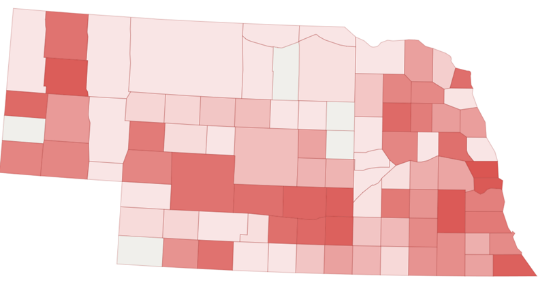 In the last couple of weeks, many people have been forced to work from home on a consistent basis.  For many, this is the first time they have confronted a “need” for internet bandwidth rather than just a strong desire.  Sadly, much of Nebraska lacks the level of internet access necessary to work from home on a consistent basis.  One of the many things that COVID-19 has revealed to the country is how essential internet connectivity and speed is to daily life.  For this reason, the Aksarben Foundation and its workforce initiatives – the Nebraska Tech Collaborative and Northeast Growing Together must make  broadband access a priority.

The utility of the internet is becoming more necessary for many functions – shopping, telehealth, schoolwork, and video conferencing.  But, according to Broadband Now, Nebraska ranks 48th in the country for broadband access.  Iowa ranks 45th.  Kansas ranks 28th.  In a more connected world, places like Nebraska will increasingly need to have stronger broadband access to compete.  Therefore, one of the fundamental goals for Nebraska should be to dramatically increase broadband access across the state.

Today, like never before, access to and speed of internet are key considerations affecting people’s lifestyle, location, and personal choices.  Performing poorly is likely to impact the state and its employer’s ability to recruit key talent.  And right now, it affects those employees’ ability to work from home.  It also affects those employees’ ability to help their children learn from home, or attend remote education.  COVID-19 has highlighted the important access and speed needs of twenty-first century Americans.  For this reason, we did some investigation to illustrate my own use and internet needs.

My first step was to do two different questionnaires to reveal how much internet I needed.  Having spent some time shopping for internet over the last year, I suspect that my actual usage and needs are slightly greater than the speeds to which I current subscribe. First, I have a number of users at my house, including four teenagers and a wife who is practicing telemedicine due to the virus.  We stream a significant amount of media for tele-schooling because my children are forced to do their schoolwork from home.  My family also has multiple streaming services and no longer gets cable TV.  Instead, we use Hulu, Disney +, Netflix, and Amazon Prime for our entertainment needs.  In addition, my children play Fortnite and other games that use internet streaming.  We are not typical, for sure – but we are also not extreme gamers nor people that rely on secure access.  According to multiple questionnaires, my family should have at least 100Mbps service at home.  You can see from the Nebraska Access map, big sections of the state lack service necessary for my family to function both during the pandemic, but also during pre-pandemic normal use times.  For comparison’s sake, I have also included 100 Mbps maps for Iowa and Kansas.

At the office (where I am a solo worker currently due to COVID-19), my team does not always come into the office to work.  In fact, many of the team members had already worked from home on a consistent basis – prior to the pandemic.  However, it is not uncommon for two of us to be utilizing video conferencing at the same time.  We have found this to be a stretch under normal circumstances, and we frequently have had challenges associated with our broadband use.  We have consistently tested our speeds at work to ensure that we are not being crammed down – and frequently we flutter on the edge of what we need.

Many services provide speed tests.  For example, I used AllConnect’s speed test to write this article.  When I performed the test on a Saturday afternoon with no other users on my office computer network, I had a 55.14 down / 11.71 up speed.  This is consistent with the service that I pay for from Cox Communications.  My business service costs approximately $275 per month (including three telephone lines).  An alternative test can be found at www.speedtest.net.  This is about two times as expensive as the same speed to my home, which is four blocks away and probably on the same Cox broadband circuit.

Based on information provided by the FCC, a person regularly conducting various activities should attempt to secure the following level of internet speed (at a minimum):

In fact, for tele-commuting for either work or school, the FCC recommendation is 5-25 Mbps.  From the data, it is unclear if this means that you need to stack users, but either way, my family needs a lot of internet to go about their COVID-19 days.

Internet access is an essential tool for workers in the state of Nebraska.  Our current position at 48th leaves us well behind many other states.  Statistically, these failures play out in several ways.  According to Broadband Now, Nebraska ranks low on terrestrial broadband coverage and average speed.  It also has an incredibly low percentage of access to wired, low-price plans (only 10.8%).  Kansas as a comparison, has low-priced access for approximately 51.7% of its residents, and an average speed of 60.7 Mbps.  Kansas is still in the bottom half of states.  Functionally, this means that many potential workers who are stranded during the virus outbreak cannot utilize broadband to upskill or reskill.  As the country shifts away from many service and manual labor jobs, having the ability to work from home is not just a luxury – it is a necessity.  Nebraska needs to improve its entire broadband infrastructure – achieving 1 gig speeds in all our urban areas but also ensuring that our rural areas have adequate speeds for tele-schooling, tele-health, and whatever tele- comes next.  This is one of the primary reasons that leaders from around the state have joined together to solve this issue.