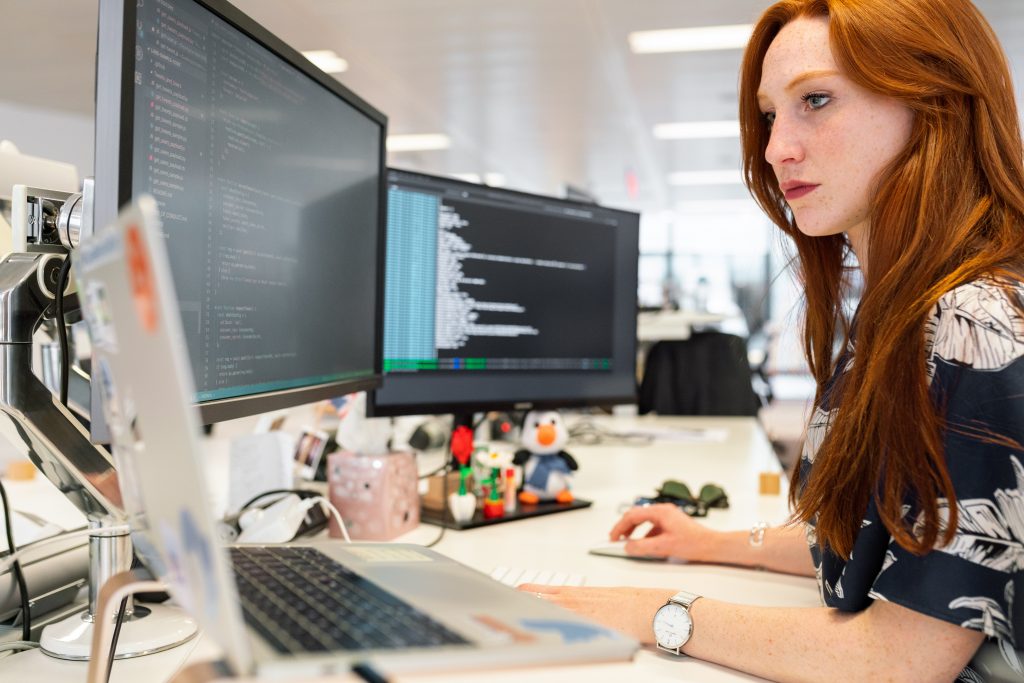 This week the Bureau of Labor Statistics produced its annual Occupational Employment Statistics (OES).  This year’s data was particularly interesting for two primary reasons.  First, with the surge in COVID-19 cases in the second quarter of 2020 and the reporting date being in May – this is an excellent reveal on how COVID-19 affected employment from 2019 to 2020.  Second, we took up the task to compare not just average wages (which is our typical analysis) but to also analyze wage categories at different levels in Nebraska communities.

It is hard to say that communities gained ground during the pandemic, but Lincoln, in particular, had very strong numbers compared to its 2019 standing with a gain of more than 500 jobs.  Conversely, Omaha lost nearly 700 tech jobs during the time period.  Some of this loss is undoubtedly tied to the significant reduction by TD Ameritrade because of its merger, but a significant portion is also tied to COVID-19 striking the travel industry acutely.  This led to significant job reductions, including IT, at Sojern and Travel and Transport.

The likely 2020 effect is more of a blip than a trend.  Instead, we believe that the trend line for most regional communities continues the increase of Math and IT employment in the region.  To this end, Nebraska’s overall technology growth over the five-year period analyzed is about 8% or 1.6% annually.  This growth rate is above the state’s overall population growth rate, but below the national rate for technology job growth (approximately 10% over the last five years, or 2.02% annually).

Certain segments of the technology workforce have seen the rapid expansion of jobs, and particularly wages over that period.  Network and System Architects have seen significant wage growth, along with software developers.  That being said, when the Aksarben Foundation, as a precursor to the launch of their workforce development initiation – the Nebraska Tech Collaborative, did an analysis of open technology jobs last summer – there were more than 2000 open positions in the State.  These open jobs represent a significant percentage of all tech jobs in the state – and reflect the limited statewide growth since 2016 – when 2240 more jobs were surveyed.  This suggests that Nebraska lacks the talent to fill the jobs and that many firms may be seeking to hire elsewhere because of the limited talent in the state.

Nebraska needs to increase the raw technology talent capacity – it needs more technologists.  This is true of many U.S. cities, but we are clearly seeing the lack of technology talent by the relatively low growth compared to the country. Thus, the goal to increase technologist jobs in the state is not just about job growth for job growth sake – but the intentional effort to increase and improve the pipelines for technologists – whether that be through recruitment, creation, upskilling, or retraining.  This pipeline improvement does not just force salaries higher – but creates an environment where the overall ocean of technologists is much larger allowing companies across the wage, innovation, or industry spectrum to benefit from NTC’s efforts. 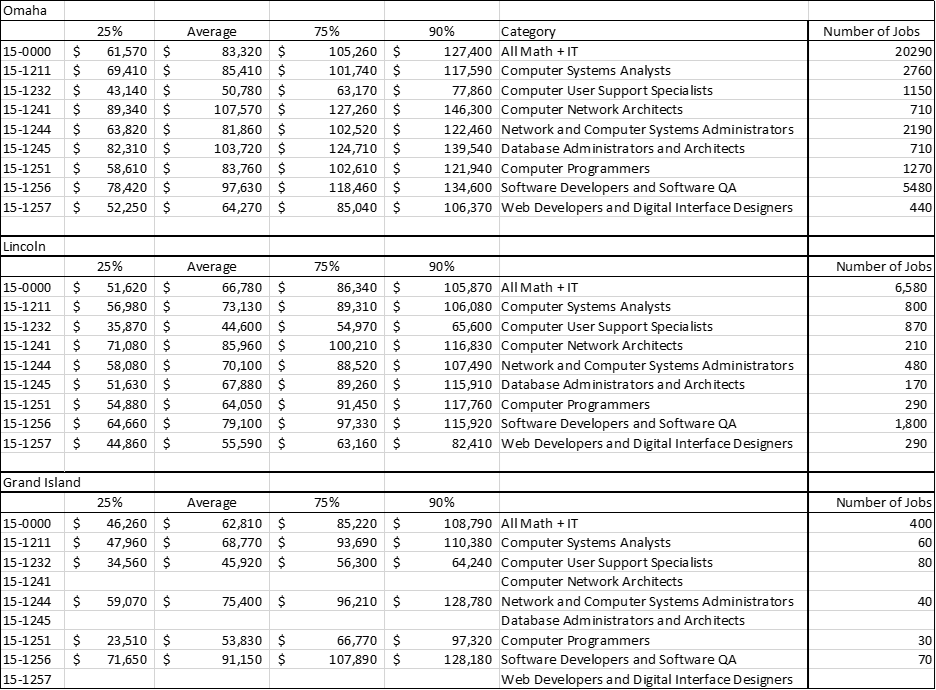 As with previous analysis, this suggests that Lincoln’s wages are low relative to its size and frankly its level of successful job growth.  The market is likely to pull Lincoln employers to pay more for important roles because of its proximity to Omaha and the moderate distance between the two labor markets.  For example, a software developer (15-1256) could make approximately $15k-$20k more at every job level in Omaha versus Lincoln.  This relative difference in wage creates an incentive for an employee who lives in Lincoln to commute and work in Omaha.  This is not a substantive judgement of the two communities, only a reflection of the relative wage level and incentive structure for technologists in the two markets.  This may help explain the expansion of large Lincoln employers – Nelnet, Spreetail, and Hudl – in the Omaha market.

The last major issue that affects the Nebraska technology market continues to be density in Omaha (67.1%) and Lincoln (21.8%) versus the rest of the state.  Essentially, these two markets make up more than 88% of the technology workforce compared to roughly 2/3 of the state’s population.   This disparity is significant when considering the high wages and growth rate of technology jobs in the U.S.  As a state policy, it is critical that the state attempt to balance the workforce through programming in micropolitan areas – including college towns – such as Kearney, Wayne, and Chadron.  However, most of these communities produce limited technologists making the search for a technologist in Greater Nebraska very difficult.  As such, companies in need of technology help often open offices in the state’s two largest cities – promoting even more brain drain from rural areas.

In conclusion, the new OES data points to three big takeaways.  First, COVID-19 caused job loss in many places – in Nebraska, Omaha seems to have been affected most negatively in the technology category.  Second, wage levels continue to rise above the average wage for the state and the nation – but wages continue to lag in Lincoln.  Finally, urban Nebraska appears to house the technology industry as opposed to a more equal balance across population lines.  In short, many of the efforts of NTC appear to be targeted at key policy goals and some slight progress over the five-year rolling average seems to be indicated (albeit slightly).