On May 26, 2021, Governor Pete Ricketts signed LB 387, a bill that exempts military pensions and retirement benefits from Nebraska state income tax.  This bill was an important element of the 2021 workplan of the Nebraska Tech Collaborative, a workforce initiative of the Aksarben Foundation.

NTC worked in collaboration with the Nebraska Chamber of Commerce, the Department of Economic Development, the Greater Omaha and Lincoln economic development partnerships, and many other partners to help policy makers understand the impact of the military in the state, as well as the implications of taxing retirement benefits.  This effort involved many people working together – as is the hallmark of NTC.  NTC is about collaboration to improve the technology workforce and landscape in the state.

While NTC is not a lobbying organization, our President, Jona Van Deun, and other key leaders spent significant time and energy discussing the problem with organizations around the state.  This helped build the necessary support and coalition to write and later pass LB 387 (by a vote of 47-0).

LB387 was introduced by Senator Tom Brewer of Gordon, who stated at the introduction: “The income tax exemption is not only an obvious way of expressing gratitude to our armed forces and veterans. This bill helps us keep pace with our neighbors and stop missing out on opportunities to attract these outstanding groups of individuals to grow and enrich Nebraska.” 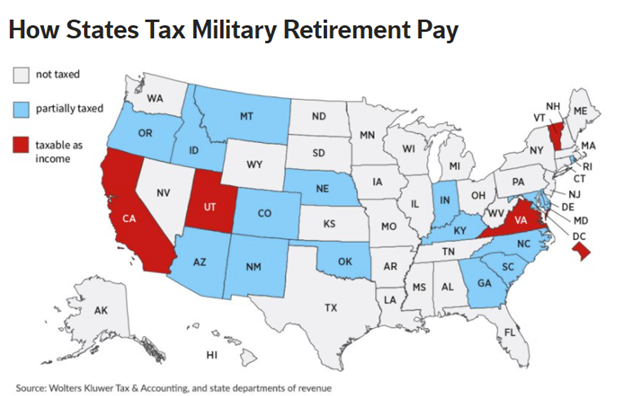 The map above (clipped from an AARP article) illustrates the world prior to the change in Nebraska’s tax law.  Nebraska joins most other Midwest states in not taxing military retirement benefits.  This was a significant disadvantage to keeping retired military and families in the state – particularly as one of the state’s largest employment hubs is Offutt Air Force Base in Bellevue, Nebraska.

Between the combined missions housed at Offutt AFB, more than 4000 active military and approximately twice that number of support personnel, from defense contractors to food vendors, work at or in association with the base.  Many of the active military move often – as frequently as every three years.  This means that Bellevue is one of the most transient locations in the whole state – particularly when it comes to individuals that do not have existing ties to Nebraska.  Therefore, finding ways for the state to be competitive at retaining these Nebraskans is critical to the long-term workforce needs of the entire state.

Moreover, Offutt AFB represents a microcosm of Nebraska that is more diverse than the rest of the state – including ethnic, state of origin, but also technical expertise.  In other words, the military is a training center and proving ground for many future technologists that will go on to work at Nelnet, First National Bank, or Chief Industries.  Thus, it is critical to find ways for the state to be more competitive at retention and recruitment of military personnel.

Moreover, the impact of not taxing the military retirement benefits is minimal compared to the $3B+ annual state budget.  The state revenue impact, according to the Nebraska Department of Revenue, is estimated between $13-15 million annually for the next 3-5 years.

In short, the state has taken a significant step forward by passing LB 387.  NTC was part of the effort along with a broad coalition of leaders.  This is how we, NTC and others, will transform the technology ecosystem in the state – by working together to accomplish key tasks.