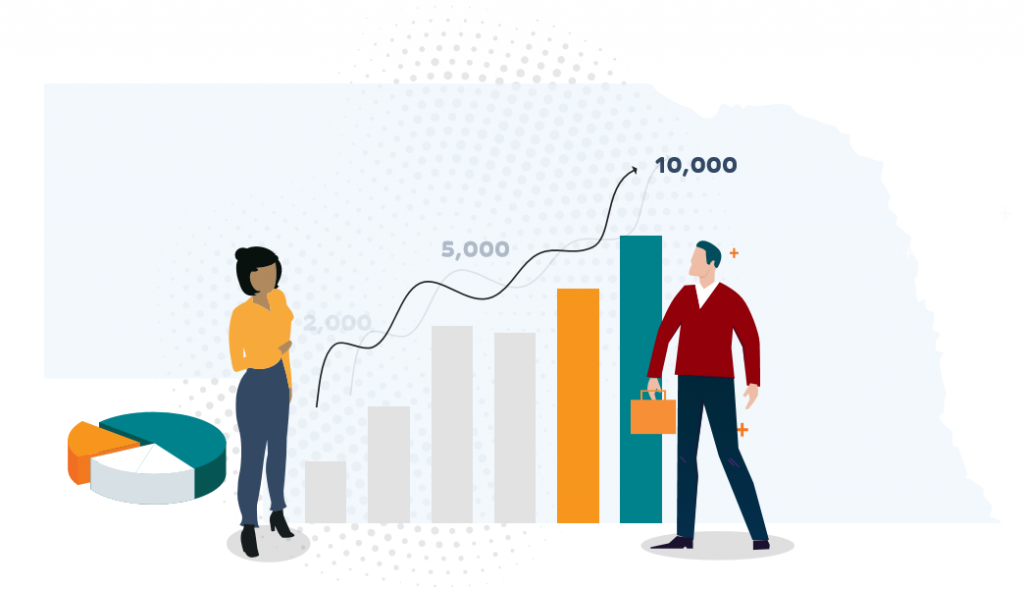 The three metropolitan areas with the majority of their population in Nebraska were included in the new workforce data released by the Bureau of Labor Statistics (“BLS”) near the end of March 2020. These numbers represent the data collected in May 2019 – so there is no COVID-19 impact recognized. In other words, these numbers probably do not reflect the true current position of many employers. However, tech jobs have appeared to be more resilient than certain other industries during the pandemic.

The BLS numbers are helpful to examine some key data points associated with the technology workforce in Nebraska. As the reader may recall, the Nebraska Tech Collaborative (“NTC”), an Aksarben Foundation workforce development initiative, has set the goal of enabling the creation of 10,000 tech jobs by 2025. Along with Growing Together, NTC is targeted specific types of new workforce engagements that will yield technology growth – including new workforce – in all parts of the state.

So, this is the first practical update on the effort, and the first year looks pretty good with an increase of 1060 new technology related jobs. In particular, the Life, Physical, and Social Sciences data was augmented by the inclusion and changes in certain definitions associated with certain medical technicians. So, the change in definition was one element that caused improvement for Nebraska. Similarly, the loss of certain technician jobs in the definition of Architecture and Engineering appears to have decreased the number of those jobs in Nebraska. Thus, while the types of jobs were slightly tweaked (as usual), the numbers showed some improvement. 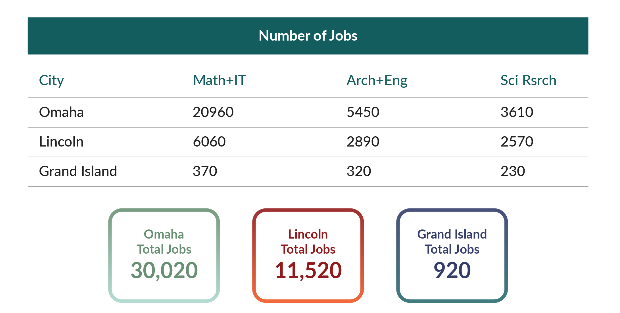 Moreover, the data has some interesting tidbits. Specifically, wages continue to increase across Nebraska. Lincoln trails Omaha regarding both average wage across the index, but grew at a slightly higher rate of change.  Technology wages in Grand Island escalated pretty dramatically – by $2460 which marks a 3.9% increase in wages over the course of a single year.  This is a strong improvement. 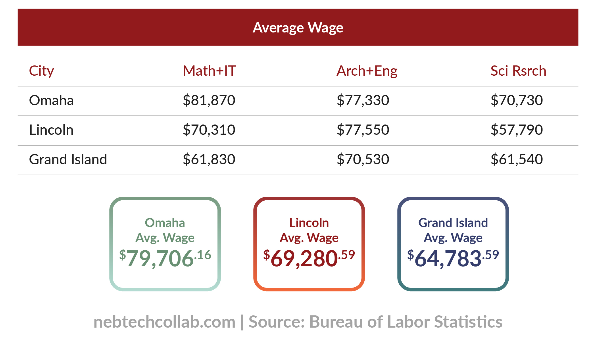 The data suggests that Lincoln continues to lag in their spending on math + IT wages, trailing Omaha by more than $11k. However, Omaha’s wages for Math + IT are actually higher than either of the other two categories, whereas the average wage for Arch + Eng in Grand Island and Lincoln is noticeably higher than its spending on Math + IT.

However, where Nebraska appears to have a leg up on much of the region is the strategic size of the workforce in both Omaha and Lincoln. Omaha and Lincoln represent two of the more technological communities in the Midwest with more than 3% of the city’s respective workforces involved in technology of one form or another. Lincoln’s percentage of workers in technology is now 3.44%, and Omaha’s is 3.19% – both remain in the Top 20 across more than 100 Midwest cities measured.

What is noteworthy is how many of the communities on the list of cities with tech workers over 3% are those that are considered the leading cities for entrepreneurship, innovation, and technology in the region. This is good company. In addition, there are a large number of college towns on the list.  This is what we describe as a small denominator result – meaning that a high percentage can be caused by a large number of technologists, but it can also be caused by a low number of total workers. This low denominator makes even small showings appear larger. So, communities such as Ames, Iowa City, Ann Arbor, and Madison benefit from having a large university with a disproportionate number of technology workers. This is not to diminish the role of technology in those communities – simply to acknowledge that universities do have a disproportionate number of technology related jobs within NTC’s metrics. 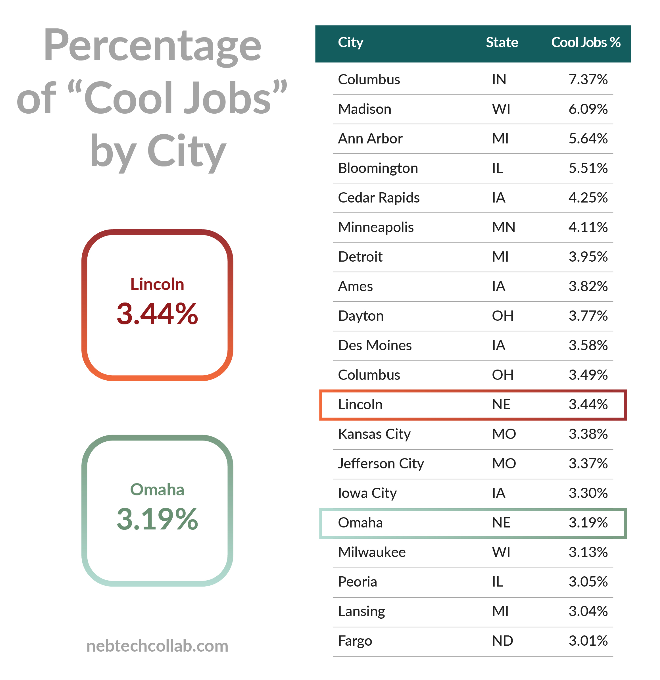 Some might ask why Columbus, Indiana is on top.  Is this a model for rural economic development? Maybe, but probably not in the short term. Our simple answer to Columbus, Indiana’s success is the sheer size of Cummins Technologies which employs more than 4500 workers in Columbus. This long relationship between Cummins and Columbus is not replicable as a strategy – but is beneficial when it occurs in medium sized cities. However, recently communities like Columbus have struggled when the large company leaves. For example, Peoria lost Caterpillar’s headquarters to Chicago.

With that said, Cummins makes engines and other technologies associated with propulsion. This shows that having a technical manufacturer is also a means for growing outsized excellence in the technological space. It is for this reason that the State Chamber, the State Department of Economic Development, and others continue to seek ways to improve the growth rate of many of Greater Nebraska’s top manufacturing companies.

In short, the big cities in Nebraska appear to be performing around average versus the general region in terms of growth. Omaha and Lincoln represent well regarding the size of their technology workforce relative to the size of their overall workforce. The foundation is definitely strong and provides a solid base for improvement across the whole state.