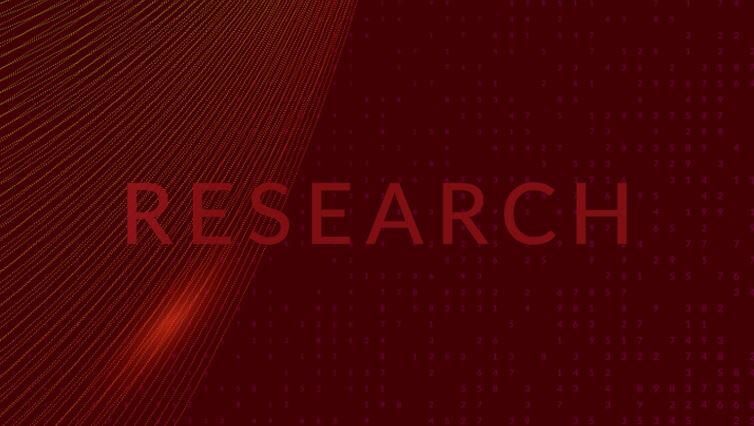 Nebraska has performed near the bottom of Midwest states regarding federal research and development dollars directed to the state.  This report examines data recorded by the National Science Foundation associated with federal research and development dollars. In 2018, Nebraska had the 12th largest amount of federal research out of 14 Midwest states.  In 2012, Nebraska was 11th. So, while Nebraska did improve over that time regarding total dollars being deployed in the state (by about $20 million), the state did not shift its relative position as a laggard in the region for research.

This is a reflection not just on the University of Nebraska system but on the broader innovation and research production of the region.  While this report measures federal dollars, private research and development in the state also lags – according to a variety of reports[1].  So, this research article is intended to provide insight into the data reported at the federal level, but also to instigate change through intentional actions by Nebraska’s leaders – including those who work with the Nebraska Tech Collaborative, a workforce development initiative of the Aksarben Foundation.

Nebraska’s overall research did improve slightly over the period of time measured, and it definitely outpaced certain states which had decreases – such as Iowa, Indiana, and Michigan.  But, Nebraska still performs near the bottom of the region regarding both total research dollars – $211 million – and per capita research dollars – approximately $109 dollars per person in the state.

In particular, what was noteworthy about Nebraska’s decline was the dramatic increase of nearly 35% to $150 million in research dollars directed to health care – most of which came through the Department of Health and Human Services and the National Science Foundation.  At the same time that there was significant growth in this area, Nebraska’s Department of Defense research cratered from just shy of $100 million to just above $10 million – representing an 88% decline of DoD research dollars to the state.

This decline in Department of Defense dollars did not generally occur in other Midwest states, although North Dakota also suffered from a significant decline in DoD research (approximately 80%).  Instead, growth in Illinois and Missouri appeared to more than account for the decreases in other states.  Between these two states, they had increases of nearly $300 million dollars or 45% and 41% respectively.

In general, the larger states performed better than smaller states from a R&D perspective – not just from dollars but also on a per capita basis.  One would expect to see a relatively flat curve across the region regarding overall R&D spending per capita.  But, this is not the case.  Ohio receives nearly 3x as many federal R&D dollars compared to a state like Nebraska.  And the difference appears to be growing more acute – as Ohio increased its per capita R&D by more than 6x that of Nebraska’s over the seven-year measurement period. 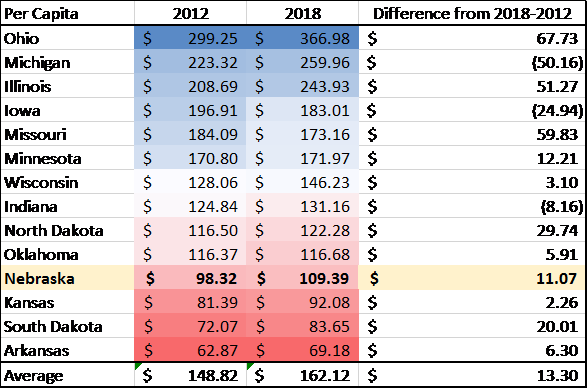 While Nebraska does under-perform in a couple of key areas – such as DoD and the Department of Energy.  Its two major areas of research Agriculture and Healthcare continue to receive a high proportion of dollars compared to the region.  So, for example, in Agriculture Nebraska receives the third highest level of federal support of all states in the region, and in healthcare Nebraska sits seventh.  These are both potential areas to continue to accelerate economic growth for the region.

It is noteworthy that Nebraska has essentially $0 in energy related research because this tends to be an area where many states have significant federal R&D dollars.  This may be because Nebraska has not been a leader in energy innovation – despite its strong wind potential.  And it may also be because the universities in the region have not focused particularly on energy research. However, it is noteworthy that in 2018 Nebraska did only $7.5 million in research which is nearly 6x the amount of energy research being done in 2012.  But, this is a far cry from Midwest states – such as Iowa ($58.6 million), Missouri ($45.1 million), and Wisconsin ($61.0 million).  Diversifying and expanding the state’s research base in energy may also facilitate a dramatic expansion of energy opportunities – including wind related ones.

Looking at federal research and development dollars is a key way to identify bellwether opportunities in the state regarding innovation and entrepreneurship.  So, performing well provides early insight for potential entrepreneurial and industrial opportunities.  Thus, Nebraska’s significant degradation in defense R&D is a serious cause for concern as Offutt AFB is the largest employer in Omaha.  This provides an early warning sign that the state may have to be more engaged in finding innovative ways to extend our understanding and research in fields that are useful for defense related functions.

Moreover, the continued success of Agriculture and growth in Healthcare research is cause for celebration as these continue to be keystone industries for the state.  Finding new ways to tap federal dollars to extend our expertise in these areas is also important.  In particular, the COVID-19 pandemic has revealed the importance of having a top-level medical research facility in the state.  We, as a people, have been the beneficiary of this expertise.

As an action step, there are pretty clear ways that Nebraska should be attempting to increase their total of R&D dollars deployed by the federal government:

In conclusion, Nebraska continues to perform slightly below the region’s average for receiving federal research and development dollars.  This is both in 2018 and as a metric of growth rate for receiving additional dollars.  This is noteworthy because of the incredible reduction in federal DoD research over the last seven years in the state.  However, within its two areas (Agriculture and Healthcare) of expertise Nebraska performs well.  And, there are clear paths for improvement in energy and defense that could dramatically reshape how Nebraska’s economy may look in the future.

All of the research provided in this blog utilized the NCSES data collected by the National Science Foundation for federal research dollars.  It can be access online at https://ncsesdata.nsf.gov/ids/ffs.