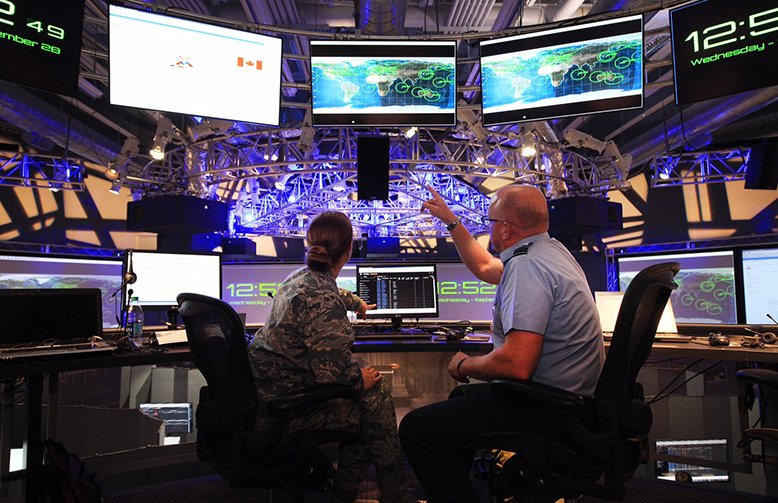 Bellevue, Nebraska is home to the state’s largest employer and a key cog in the defense of the United States.  Sadly, many Nebraskans do not know much about Offutt Air Force Base (Offutt AFB).  This is unfortunate because Offutt represents one of the state’s key economic driver .  With expertise that crosses multiple fields including technology, analytics, and communications, Offutt AFB and the military/civilian contractors responsible for the various missions are a critical source of expertise.  Moreover, many of the military that work at Offutt AFB are trained in valuable key areas that easily convert into a post military career.  Technology is one such sector that can benefit from seeking out and hiring veterans.  The Nebraska Tech Collaborative, a workforce initiative of the Aksarben Foundation, is examining Offutt with new eyes regarding its mission and its impact on the region.

The 55th Wing is the largest component of the Air Combat Command, and it has run an on-going Air Force mission in US Central Command for more than twenty-five years[1].  The Fightin’ Fifty-Fifth is a big deal in the Air Force, and it should be a big deal to all Nebraskans as it represents our state’s largest contingent of military personnel.  In particular, as the state seeks to retain and grow its workforce, one key mechanism is finding ways to engage with and increase the retention (or boomerang) of military personnel. 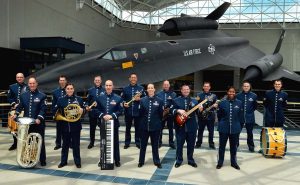 According to the 55th Wing fact sheet, the 55th Operations Group has operational control over the 12 squadrons and two detachments worldwide.  It employs 46 aircraft, including 13 models of seven different types.  The 55th Communications Group provides worldwide command, control, communications, and computer (C4) systems.  This is strategically important as it provides information management, communications, and combat support to war-fighting and national leadership.[2]  Moreover, deep expertise in the C4 realm is translational to cyber and security personnel in many commercial businesses.  C4 may also be a strategic framework for building new entrepreneurial companies, although to date, few companies have commercialized in Omaha with translational technology or ideas from the military.  One good example of a company that has been built in this way is 21st Century Systems (https:/www.21csi.com) which received a handful of SBIR grants around security and communication technology in the early 2000s.

The region is not home to deep aerospace engineering talent despite the 55th wing’s significant fleet of aircraft.  Again, this is an area where the Omaha region may be able to increase its employment by targeting slightly different types of companies.  There are a variety of aircraft tied to the 55th Wing’s mission, including the Boeing RC-135, the Boeing E-4 Advanced Airborne Command Post (“Nightwatch” aircraft), Boeing C-135 Stratolifter, the Boeing WC-135 Constant Phoenix (called the “weather bird”), Boeing OC-135B Open Skies, and the Lockheed EC-130 Hercules.  The 55th Wing has a budget of more than $477 million annually, 45 aircraft, 31 squadrons, and more than 7000 employees.  Perhaps, more companies like Lincoln’s Duncan Aviation should be targeted as a driver for relocation to the state whereas aircraft knowledge and maintenance (but not necessarily design or manufacturing) are needed.  [LB2] Despite the relative dearth of aerospace companies, one exciting company that recently grew a key technology in aerospace is Multimechanics which exited to Siemens in late 2019.  The company provided a software technology that measured and analyzed a variety of drag and aerodynamic elements for aircraft as well as other construction.

Elements of the mission of the 55th wing also suggest natural ways to partner with regional hotbeds.  Not just aerospace in Wichita – but also weather in Oklahoma.  For example, the 55th Communications Group provides C4 systems and management that supports cyber operations and other strategic missions for the Air Force and Department of Defense.  One of the key elements of the communications group is 557th Weather Wing which is responsible for providing strategic weather and forecasting across military missions and global operations. This weather forecasting is for the entire globe and stands as an example of the type of technology and training occurring in the military with strong ties to the region.  However, we have not necessarily translated that technology into new companies. 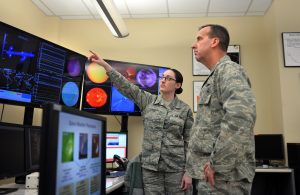 Not all of the missions of the 55th Wing are located in Nebraska.  For example, the 55th Electronics Combat Group is the only part of the 55th Wing not based at Offutt AFB.  It is based in Arizona at Davis-Monthan AFB.  The group executes information operations, including information warfare and electronic attack in support of theater campaign plans.[3]

The 55th Operations Group employs about half of the 55th Wing’s personnel.  It operates 24/7 in every geographic command in support of global reconnaissance, contingency operations, treaty verification, National Command Authority support and command and control responsibilities.  It also provides global support regarding emergencies and natural disasters.  For example, when the Fukushima nuclear disaster occurred in Japan, the 55th Operations Group participated in the measurement of nuclear material in the atmosphere.

One of the core reasons that the 55th Wing is critical is that it helps ensure air superiority in all military theaters[LB3] .  Since 1953, the Air Force has prevented any American ground forces from being killed by enemy combat aircraft.  The 55th Wing’s efforts in all of its various roles are critical in this endeavor to create a safe environment for our military service men and women.

In recent years, the Omaha World-Herald has been critical of the aging aircraft that make up the 55th wing.  For example, in an article written in 2018 the World-Herald documented a variety of challenges facing the fleet – including mechanical problems, in-flight accidents, and other in-flight emergencies.[4]  However, despite that report, the Air Force is confident that it will use many of the same aircraft with increased maintenance through 2050.  In addition, it expects to transition some of the missions to new aircraft being built – particularly new aircraft tied to the Open Skies mission of monitoring nuclear materials or other radiation in the atmosphere.[5]  In April 2020, a new $218 modernization plan was implemented to ensure that the new C-135 retrofitted fleet can fulfill this mission.  Like many of the missions at Offutt AFB, the Nebraska Congressional delegation was essential to building the necessary funding authority from the federal government.  And it is important that we, as a region, recognize the role that we play in creating support for the military in Nebraska.  This also means ensuring that there is appropriate funding and statewide emotional support for the missions. 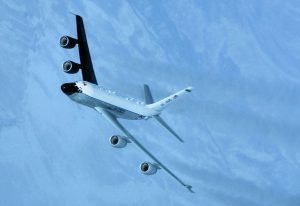 Offutt AFB and the 55th Wing are the largest employers in the Omaha MSA, and they are critical components of the U.S. military’s role of keeping the world and America safe.  As Nebraskans, we should care about how the base is doing, and we should be supportive beyond simple awareness by making sure that Offutt service people have the connections to succeed here both during their careers and after those careers are complete.

[3] This is not a direct quote from the fact sheet, but it is very similar to the description of the 55th Electronics Combat Group.