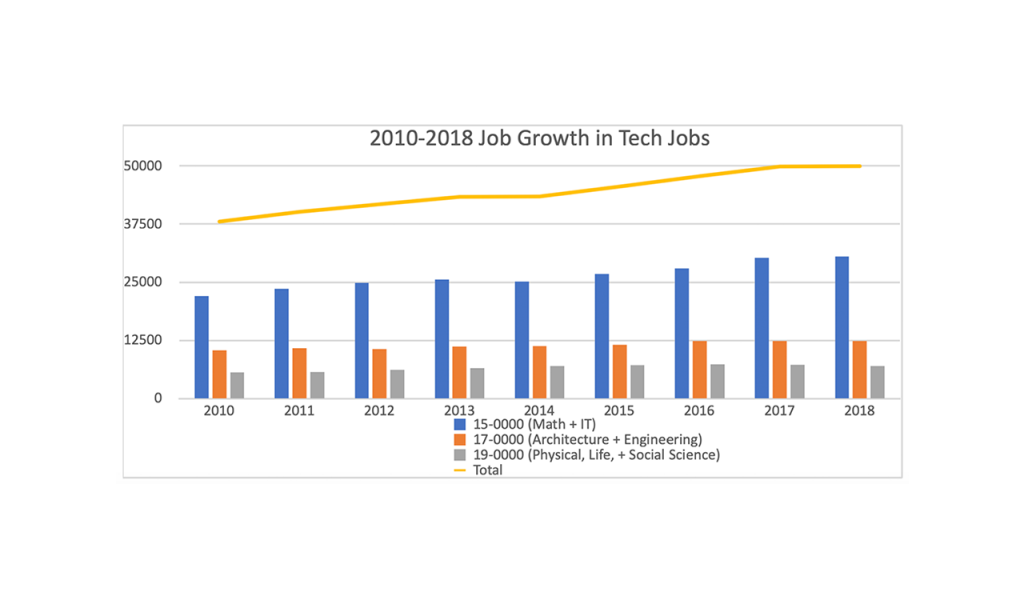 The Nebraska Tech Collaborative, An Aksarben Workforce Initiative, is a volunteer driven organization that is attempting to transform the technology landscape around the state of Nebraska.  With leadership that has national experience in bringing people and businesses together, the organization has set four challenging goals to accomplish by 2025.  These goals are:

Currently, the state of Nebraska has 49,930 technology workers.  These technology workers are defined using the Bureau of Labor Statistics, Standard Occupational Classification Codes.  These jobs are reported in March/April for the previous year’s May reporting period.  As you can see in the graph below, an increase of 10,000 workers would dramatically shift the trend line of technology workers in Nebraska.  It took Nebraska nine years to add 10,000 technology jobs over the last decade.  To do this in five years is a significant challenge.

In order to do this, one key aspect is to create opportunities for a broader array of people – including women and people of color.  Diversity and inclusion are not a strength of the current technology environment in Nebraska. But, by using both intentionality and regular measurement, the goal is to dramatically improve diversity within technology ranks in the state.  As stated, the goal is to have 40% of all new hires in technology jobs be women, and 20% be under-represented groups including racial minorities and immigrants.  The first survey will go to partner organizations in 2020.

Another key effort to improve the overall technology ecosystem is to create more technology and technology enabled ventures.  Nebraska consistently performs low on venture capital measurements.  For example, in their recent report “Blueprint Nebraska: Growing the Good Life”, McKinsey cited the Kauffman Foundation’s research on entrepreneurship that places Nebraska near the bottom of states in venture capital deployed.  In looking at the Kauffman data for 2017, the current position of Nebraska is not strong: #47 rate of start-up growth, #38 share of sale-ups, #39 startup early survival rate, #35 rate of entrepreneurs, #40 start-up density, and #29 venture capital funding, percent of GDP.  And while things did improve in 2018, the need for significant improvement persists.  As such, NTC will measure venture capital and other early stage activity to identify the creation of 300 new tech companies over the next five years.

Accomplishing a higher new venture creation rate is important to the state’s technology workforce, wealth creation rate, and reputation.  In the last decade, Nebraska created just 367 of these companies according to NTC’s metrics. So, having a five year goal to create 300 is a challenging, but accomplishable goal.

Finally, NTC believes that it is not just a matter of creating successful new ventures or hiring more technology talent, but it is also important that other states see and hear about the success.  In other words, it is important that the reputation of Nebraska also improves.  Reputation enhancement helps Nebraska companies sell more products, recruit personnel, and find more capital.  NTC is targeting an improvement of 20% above 2020’s base year regarding news mentions around key topics, such as Nebraska and innovation.  Today, when Nebraska companies raise outside venture capital they do not receive mention in TechCrunch or VentureBeat.  This is a failure of the whole state’s ability to tell effective stories and communicate about our most successful ventures.

When Nebraska companies create technologies that solve problems related to many of life’s great challenges – no one knows.  And this lack of a mouthpiece often prevents Nebraska companies from taking bigger steps into the future.  For example, the University of Nebraska Medical Center has received significant, warranted praise around its preparation and response to COVID-19.  It is important that we, Nebraskans, take pride in this.  But, it is also important that potential new Nebraskans know of our state’s key role in fighting pandemics.  Even if that person is considering a job as a technologist at a company in Nebraska, having the reputation across all fields for innovation greatly enhances the businesses across the state’s ability to recruit and retain key people.

In short, NTC is leading the charge on building a twenty-first century Nebraska – enabling the creation of new technology jobs that include all of the state’s people and telling the story about why Nebraska is a great place to be in technology.