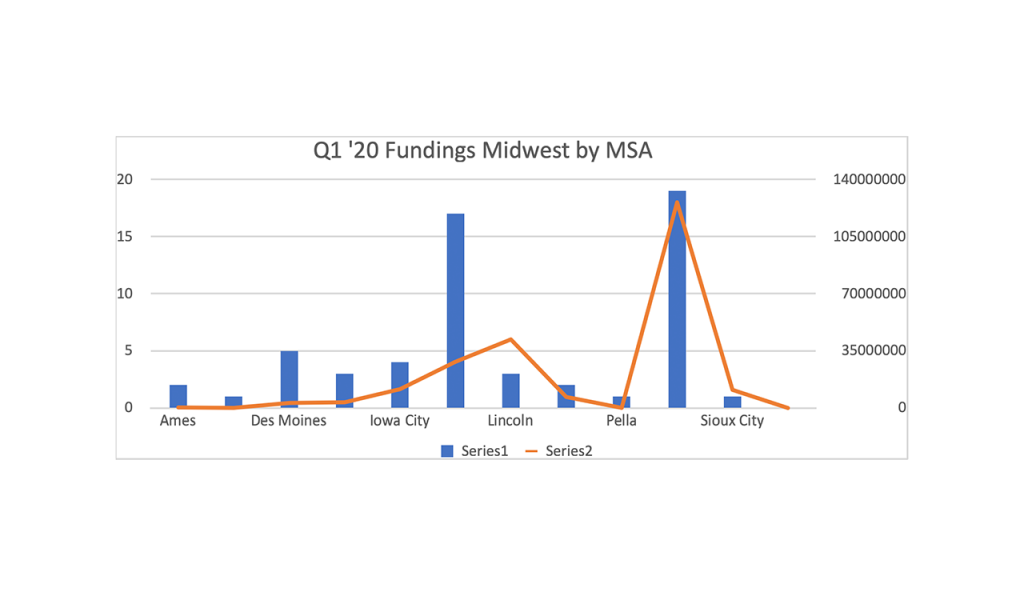 Venture Backed Startups in the Midwest

The Nebraska Tech Collaborative, An Aksarben Workforce Initiative, has as one of its key underlying goals to create 300 startups in the region. One part of the measurement of this is keeping track of venture investments in the state of Nebraska.  This blog post will provide some insight into what has been happening in Nebraska during the first part of 2020 and providing some similar data regarding surrounding states.

The State of Nebraska had a significant amount of capital deployed into startups in the first quarter – more than $45 million.  However, the fundings are very large follow-on rounds to companies that have been operating for some time – in the case of Virtual Incision since 2007.  This provides an insight into what our current ecosystem looks like.  There appear to be companies working through their life cycle – but not a large number of new start, venture backed companies.

January was really great for Nebraska with two large rounds – Virtual Incision (which was actually documented in October 2019, but announced in January) and Adjuvance.  These two companies both took in $20 million rounds during January.  To give you an idea of how large these fundings are – since 2010, Nebraska has had only 8 deals larger than $20 million.  None occurred in the same month – meaning that January 2020 was an auspicious start to this measuring period.  They are also the

Virtual Incision is a Lincoln based company started by Shane Farritor in 2007.  Dr. Farritor is a renowned serial entrepreneur within robotics, particularly as it applies to healthcare.  Virtual Incision’s latest B+ round included participation from South Dakota based venture firms – Bluestem and Prairie Gold.  It also included Genesis Innovation Group.  The purpose for the investment according to the January 8, 2020 press release was to further the efforts around a miniature surgical robot – MIRA.  This device will dramatically decrease the invasiveness of medical procedures – particularly those along the digestive track.  At the same time as its funding announcement, the company announced that the device has moved forward in its FDA approval process.

Adjuvance is a biopharmaceutical company that provides vaccine adjuvant design and manufacturing.  The company has developed a variety of adjuvants, but its leading one, TQL 1055, is in pre-clinical development with a wide spectrum of potential uses.  The company raised $20 million from a Hong Kong based private equity and venture capital company – Morningside Venture Investments. Adjuvance expects to move forward with the additional funding to continue the development cycle on TQL 1055 and other adjuvants.  In the press release, Lisa Sypal, Adjuvance Technologies Director of Investor Relations said that the company is appreciative of Nebraska’s support around their company.  “Our partnership with Nebraska Innovation Campus and the early support provided by groups like the Nebraska Department of Economic Development, Invest Nebraska, and local angel investors have been a key component in our ability to advance our mission.”

February was a strong month for the Midwest.  The region compiled more than $50 million in fundings across twenty deals.  Missouri represented mot of the deals and most of the money with Saint Louis leading the region with two large deals – NewLeaf Symbiotics and Adarza Biosystems.  There were no funding events in Nebraska.

The fact that there were no funding events in Nebraska in February is not necessarily a concerning situation.  However, the fact that across the quarter there was only one company raising their first round of capital is a little concerning.  First fundings are like canaries in the coal mine.  They provide early insight into the strength of an ecosystem because they illustrate the likelihood of sustained fundings and ecosystem growth.

March was a little better for Nebraska.  Three companies were noted as having received outside capital rounds.  Specifically, Opendorse and OpsCompass received additional rounds of capital.  Both funding sources were primarily from out of state.

Opendorse is a Lincoln based SaaS company that provides an engine for sponsors and athletes to create social content endorsements.  The company was formed in the early 2010s by Blake Lawrence and Adi Kunalic, former University of Nebraska football players.  Through this sports connection, the company has grown to be the premier athlete endorsement engine in the world – hosting premier athletes in virtually every sport.  According to Pitchbook, the company has raised more than $14 million dollars to-date from a variety of sources, including Flyover Capital which is based in Kansas City but has ties to the University of Nebraska through one of their venture partners, Keith Molzer.  Opendorse recently announced a partnership with the University of Nebraska on Name, Image, and Likeness making it the conduit for the first of its kind university/athlete partnership to help athlete’s navigate the new environment of college sports’ marketing.

OpsCompass is an Omaha based SaaS company that facilitates cloud posture management for enterprises.  The company has grown rapidly with two acquisitions in its short lifespan, acquiring both Agape Red and House of Brick in the last eighteen months.  In addition, the company’s SaaS product is considered the premier technical solution for cloud security posture management (CSPM) in the Azure tech stack.  The firm has participating investors from Chicago (M25) and in this round, Elsewhere Partners, from Austin.  The company is also backed by Omaha based Dundee Venture Capital. Following the raise, the OpsCompass press release included the following quote: “Our team has monitored this industry for some time and seen a significant change in market demand for cloud governance and compliance,” said Sloane Child, vice president at Elsewhere Partners. “Moreover, we have been following leaders in the space who are delivering inventive, cloud-native solutions to enterprise clients. OpsCompass clearly understands this market and has already established impressive traction by landing numerous marquee customers.”

The other company that was marked as having raised outside capital is a company with strong ties to the University of Nebraska – Omaha’s Peter Kiewit Institute – STEMBoT.  This firm was included in Austin based Capital Factory’s newest class.  STEMBoT is an educational technology that blends ed-tech software with robots. According to the Capital Factory website: “STEMBoT’s mission is to provide innovative robotics solutions and accessories to educators, hobbyists, and professionals. STEMBoTs are engaging for students and easy for teachers to use as well.”

The first quarter 2020 was a fine quarter for Nebraska based, venture backed startups.  In particular, it highlights both the growth of the healthcare technology in Nebraska but also the growing ties of Nebraska based companies to venture capitalists around the world.